We participated in the Savory Institute International Conference “Transforming the Landscape with Holistic Management” in Boulder, Colorado with much enthusiasm and hope. We met many other colleagues devoted to the soil, which sustains life on dry land and home to invisible universes that contain prodigious processes which make life possible. We are very happy to have use of Holistic Management tools and learn about experiences which have been so highly developed in so many places around the planet. A pioneering effort by teacher Allan Savory, a master teacher, and I can imagine how many battles he has fought over the decades, against interests which are so contrary to the planet’s health, and against mercenaries who extenuate life, selling it for copper coins. Nowadays the Savory Institute has an impressive worldwide reach, building up to start of a viral process as a response to soil degradation, desertification and climate change.  Sierra Gorda is one of the first official Savory Hubs, operating in central Mexico and the South.

It is a pleasant surprise to find a group of people who are taking action, with a defined strategy and replication plans. During such a rich encounter and as part of the strategy to include 404,685,644 hectares (or 1 billion acres) under Holistic Management, it would be possible to reduce current atmospheric carbon concentrations as a greenhouse gas and convert those lands into organic carbon and water sinks. Through the operation of 10 Savory Hubs in different parts of the planet it has already proved to be very effective by replicating the dynamic process. Within a few years people are seeing before their eyes the conversion of inhospitable landscapes into grasslands that have recovered their vitality and biodiversity, recuperating productivity in front of people’s eyes within a few years, increasing biomass above and below the surface and therefore also healthy cattle herds. With soil productivity recovered and the CO2 and water returned to it, streams recover and erosion channels disappear, re-vegetating and recuperating biodiversity. Regenerating soils through this approach gives impressive results and is in every producer’s best interest.

I am grateful that this knowledge reached Sierra Gorda six years ago now, where we have been able to show how to recuperate productivity in pilot farms, making the most of every rain event, harvesting incredibly healthy maize and vegetables, also training many men and women to produce vegetables which are well fed with biofertilizers, reintroducing micro organisms and reintroducing minerals into the soil, carrying out Keyline design to manage runoff and make the most of rainfall infiltration, preparing the region for what is to come. These are innovative techniques that we have already adopted and are putting into practice and transferring this knowledge to our farmer partners on a local and national level.

We have been organizing training days at many different levels, mini workshops in communities, national forums, and facilitating the exchange of experiences through our Earth Center where we continuously offer these events.

So, I am reinvigorated to have been selected as one of the Savory Hubs, attending to central Mexico and South to consolidate our projects and affirm that we are doing it correctly. We are starting a new stage in which our training events will be aimed towards this change of mindset that we so urgently need to raise, adding drop by drop, parcel by parcel, and building a growing conscience among farmers. We will be joining with new groups of friends and allies; and with the experience of the Savory Institute we will be able to raise a tsunami for the Earth.

Local children for a clean Sierra

Under the supervision of Grupo Ecológico Sierra Gorda I.A.P.’s environmental education team with support from community leaders, students from various schools in the Sierra Gorda have been organizing rubbish collection campaigns. The students’ commitment and enthusiasm has resulted in a substantial amount of PET plastic, glass, paper and cardboard being sent for recycling.

Many schools participated including Santa Inés, Agua Zarca, Tlaletla, Quirambal. It is always a delight to see the participation of young people as they learn new skills and good habits for the future. Rubbish collection campaigners secure a cleaner and healthier Sierra for everybody.

Every day more companies, individuals and associations take social responsibility actions by mitigating their ecological footprint with Biodiverse Carbon, a product of Bosque Sustentable A.C. In June, the organizers of the V Annual Joint Congress of Associations from the Energy Sector and the Annual Congress of the Mexican Association for Energy Economy (AMMEE) in Acapulco decided to mitigate a total of 240 tons of carbon derived from the celebration of the congress, fighting climate change, protecting biodiversity in the Sierra Gorda and compensating local forest landowners for this environmental service. Read the full article here:

You can become carbon neutral too! Mitigate your own ecological footprint!

The students of the Bilingual High School Academia Juárez decided to commemorate Earth Day by planting trees in a local school and organizing a fundraising campaign to preserve the ecosystems and species of the Sierra Gorda.

They raised a total of $100 dollars that they donated to the Wildlife Rescue Program of Viva Sierra Gorda. The money will be used to protect endemic and endangered species that inhabit this Mexican sanctuary.

Under the supervision of teacher Menry Nielsen the students researched the many conservation projects in the country and chose Sierra Gorda. They chose Sierra Gorda because of the work it has achieved in the State of Querétaro. A contribution that serves as an example of the impacts young people are capable of achieving.

The word Ajolote comes from “Axolotl”, or water monster in Náhuatl, name that these amphibians receive, that preferred as in the case of this species in the Sierra Gorda, cold water currents high in the Sierra. Their gradual disappearance due to water contamination, climate change or persecution due to myths or for the fabrication of home remedies, has put them in serious risk of extinction.

Workshop: The ABCs of ecosystem products with Peter Donovan, founder of the Soil Carbon Coalition

Peter Donovan of the Soil Carbon Coalition and the Bosque Sustentable A.C team offer a unique workshop in which they share accumulated experience from the Sierra Gorda Biosphere Reserve, where ecosystem services are turning into an income for local communities. Learn about the carbon cycle, elaboration of local protocols, improved practices to increase the biomass of a forest and the organic matter in the soils, how to establish a base line and monitoring practices, with a flexible, practical and local technique.

Sierra Gorda in the NEWS:

Flora and Fauna in Queretaro affected for 5 years 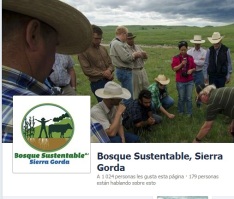 This past Monday Enrique Peña Nieto, the president of Mexico, decreed the Week for the Environment to frame the World Environment Day, July 5th, which was established in 1972 by the United Nations during the Stockholm Conference. In Querétaro, Grupo Ecológico Sierra Gorda I.A.P. has seized the occasion to launch a new institutional image and website to the public, inviting them to get to know the emblematic work that is done in regards to the environment and civil participation for a sustainable future online: http://www.sierragorda.net

The emergence of local entrepreneurship is exciting because local service providers are exploring their potential, strengthening their weaknesses and integrating in a synergy for sustainable develop.
– Martha “Pati” Ruiz Corzo, Director, Grupo Ecologico Sierra Gorda IAP

You can donate to this project NOW, click here.  I did.

Women entrepreneurs in the extreme poverty conditions of rural Mexico need seed capital to bridge the gap between current local capacity and the requirements of quality tourism. Cuatro Palos Ecolodge is the first of 15 roadside restaurants and 15 ecolodges seeking help to improve business and livelihoods. Help them build a small lodge with natural materials in a strategic tourist destination they own and operate in the Sierra Gorda Biosphere Reserve.

What is the issue, problem, or challenge?

In a remote community of 122 members, like Cuatro Palos, every family faces the cycle of extreme poverty, illiteracy, alcoholism, migration, the vulnerability of women with young and elderly dependents and no skills. Help 20 adults to expand the community-based microenterprise by building an ecolodge for tourists to stay the night and to improve the quality of the service and products in order to benefit their local economy and the sustainable future of the Sierra Gorda Biosphere Reserve.

How will this project solve this problem?

Since 2002, the local women have been operating a small restaurant and guide services for tourists to see Cuatro Palos; but with no other products or services, the number of clients is small and irregular. With a new ecolodge that they build themselves, the women will identify personally with the new enterprise, increase the number of attractions for clients to stay longer and spend more, and break the poverty cycle.

Learning to build with clay and local materials, to maintain standards of hygiene and to coordinate the services available means the members of the cooperative and their families will gain the know-how to live better. Respect for sustainable criteria among the emblematic small roadside businesses will set a standard for local tourism providers and gain wider attention, in turn encouraging other service providers to follow their lead. As the number of clients increase, so will employment.