Rio+20 and the Voice of Multiple Stakeholders

For Rio+20 the Sierra Gorda alliance of grassroots organizations
has chosen a route of more benefit to the planet and reduced emissions. That is, instead of attending, we contacted all of the organizations we are most involved with who have an influential role in the talks and events and will represent the Sierra Gorda in their different venues. Yann Arthus Bertrand will show the 20 minute documentary he filmed not long ago of Pati Ruiz Corzo, GoodPlanet Film Festival, from 16 through 21 June, at the prestigious Odeon cinema in Rio de Janeiro; The Stakeholder Forum is publishing articles like th one attached here on behalf of the NGOs at Rio+20; Natarjan Ishwaran, Director of the Man and Biosphere(MaB) UNESCO will share videos and articles about the best practices being shared from the Sierra Gorda model; UNESCO´s United Nations Decade of Education for Sustainable Development showcases the diploma course from Centro Tierra Sierra Gorda; Earth Day Network´s Billion Acts of Green campaign includes the 53 Earth Festivals held during 2 months this year in the SIerra Gorda Biosphere Reserve thanks to the Environmental Education program of Grupo Ecológico; Forest Trends will discuss the successful implementation of accessible voluntary market practices and the development of local protocols in Queretaro with Governor José Calzada; and various partners will refer to Sierra Gorda as a carbon neutral option, such as MaB UNESCO, Forest Trends and the U.N Foundation, the founding donor that offset their office emissions with Sierra Gorda´s Premium Carbon that is validated under the VCS and CCBA standards.
Published on June 15th, 2012 in the multi-stakeholder magazine,                    Outreach on Climate Change & Sustainable Development by the

The Grupo Ecológico Sierra Gorda, I.A.P. (GESGIAP) was founded in 1987 by local citizens from the Sierra Gorda, a mountainous region situated in the state of Querétaro, Mexico. It is one of the most ecologically diverse regions of Mexico, but also has high levels of poverty. The organisation has demonstrated that the success of projects for the conservation and protection of biodiversity and sustainable development is determined by a foundation of social strategy that involves the community, has clear and measurable objectives, and is supported by an alliance of government and private sector.

When GESGIAP initiated its work, the Sierra Gorda was facing numerous threats common to areas of high biodiversity in Mexico and Latin America, such as extensive cattle ranching, inefficient agricultural practices, forest fires, inadequate forest management, and contamination, all exacerbated by the lack of knowledge and extreme poverty of its inhabitants. There are 95,000 people in the Sierra Gorda that depend on traditional sustenance activities, such as farming and the extraction of goods from forests.

How it all started

When the movement started, there were only a handful of volunteers in a totally forgotten rural environment. As in other areas of the country, no regulations existed for the management of its natural resources. GESGIAP obtained the support of local inhabitants of the area and together requested that the federal government protect the area through the creation of the Sierra Gorda Biosphere Reserve (now recognised by UNESCO). In 2001, it became the first Mexican NGO to obtain Global Environment Facility (GEF) backing to scale its activities up to a full-size project entitled ‘Conservation of the Biodiversity in the Sierra Gorda Biosphere Reserve’, in close collaboration with United Nations Development Programme (UNDP) and the National Committee for Protected Natural Areas. The project included a $6.7 million leverage fund which led to further public and private investment totalling $41.6 million. As a consequence of this funding, 167 co-managed citizens’ sustainability initiatives have been launched within this natural area of 383,567 hectares, creating an ‘economy of conservation’.

Since 2003, resources have been committed from a range of domestic and international sources to pay for hydrological and biodiversity environmental services in more than 48,900 hectares of privately owned forest and jungle. This has led to an annual overflow of around $1.3 million and has undoubtedly contributed to the reduction of forest fragmentation (by 24%). It   has greatly increased both forest coverage (13,000 hectares recovered from 1996 to 2010) and the financial income of the owners, laying the foundation for a conservation economy.

Reforestation and the voluntary carbon market

We are  opening  new  doors  and  possibilities  for conservation by commercialising  ecosystem  services  in the Sierra Gorda Biosphere  Reserve.  We have been especially successful in the voluntary carbon market, with 14 international sales to date and several more pending. Now, rural forest owners who have reforested part of their land with native species (on formerly degraded areas) in recent years will potentially be able to generate extra income by selling the carbon that the young trees are capturing from the atmosphere.

Natural infrastructure and the treasure it represents

In the  search  for solutions  to align  conservation and  economic  development, we  have  valued the ecosystem services that  the reserve offers. In 2010, vegetation in the Sierra Gorda Biosphere Reserve contained 124,065,851 tons of carbon. At a price of $15 per ton, this amounted to a net worth of $1.1 billion. This means that, in stored carbon, communities in extreme poverty are owners of an immensely important and valuable source of natural capital, worth more than the land and timber alone. By building bridges between local owners and investors,  an economy  can be created that  compensates communities by conserving  natural  infrastructure and by replacing  unsustainable traditional  activities with those which conserve  and protect the environment.

for the sierra gorda alliance

Other publications about the voluntary offsets from Sierra Gorda:

Prevent and Control Forest Fires  – (2:20 min.)   Roberto Pedraza Muñoz of the GESG explains the continuing work to protect the forests and jungles with the support of the Gonzalo Rio Arronte Foundation.

Travel to the heart of Mexico with Sierra Gorda Ecotours
Spend  the weekend among rivers and waterfalls, click here for the tour package.
Click here for the answers to Frequently Asked Questions from tourists.
**

-Thank you to the FOMIN Inter-American Development Bank Project approved to GESG to “Promote a rural tourism model in Natural Protected Areas.”, Grupo EcolÓgico Sierra Gorda I. A. P. (GESGIAP)
**

Due to the 2nd anniversary of The Climate Project (TCP), a special event took place in Mexico City which was attended by Mr. Al Gore, ex-president of the United States of America, Nobel Peace Prize winner and a founder of TCP. The objective of TCP is to train and integrate an international network of climate change experts, who will actively educate the public about its realities, its effects and the urgent measures necessary to face it. The event took place in BANAMEX headquarters in the southern part of Mexico City. Roberto Pedraza Ruíz, Technical Officer at the Sierra Gorda Ecological Group and member of the international team of TCP exponents, had the opportunity to attend Mr. Gore’s talk about TCP’s latest plans to prepare for the new challenges we are facing.
There was also the opportunity to exchange experiences with other exponents as well as participate and contribute to the design and planning of a new phase for TCP in Mexico and Latin America.
Up until now, Roberto Pedraza has presented TCP’s climate change talk to a variety of audiences, both in Sierra Gorda and in Querétaro City, to a total of around 2,300 people.
**

This year, after the worst drought in 70 years for both our country and Sierra Gorda, the forests and jungles of the Reserve literally revived following the long awaited rains, despite many trees being unable to survive the drought. This oak forest displays new leaves in July rather than in the spring which is an anomaly and clear evidence of a changing climate.

for the Sierra gorda alliance 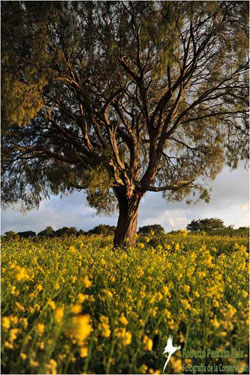 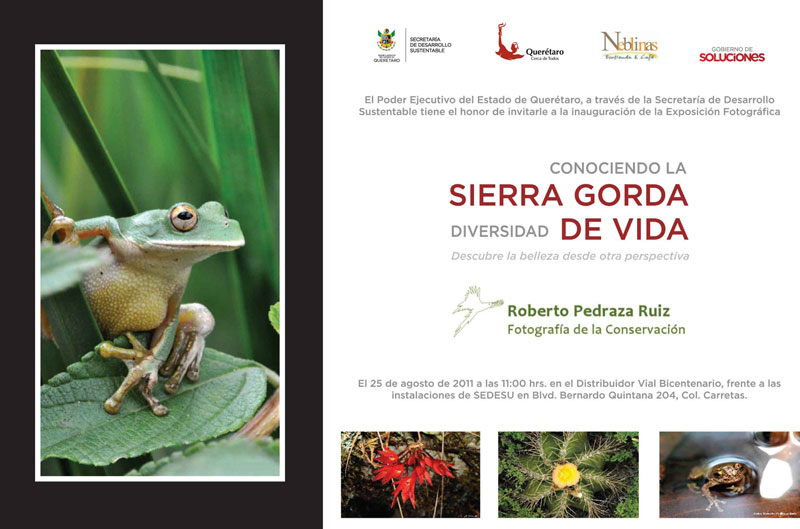 For the Sierra Gorda Alliance

1. Fly  and compensate the CO2 emmissions.
2. Ecotours: Mexican traditions with a community flavour.
3. Productos y Servicios Turísticos Sierra Gorda: The Sierra Gorda craft products shop  is full of products for the Day of the Dead. 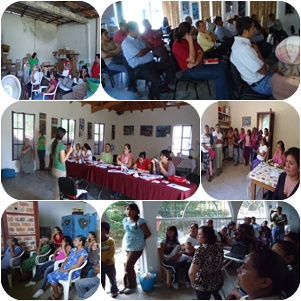 4. Training Sessions for the BID Project.
5. A happy forest.
6. Two photograph exhibitions in aid of “2011, International Year of the Forest.”
7. More Ecoclubs .
8. Photograph of the month – Sierra Gorda macaws in Spain 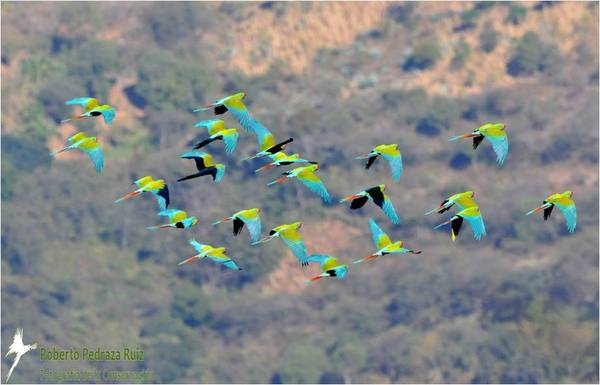 for the Sierra gorda alliance 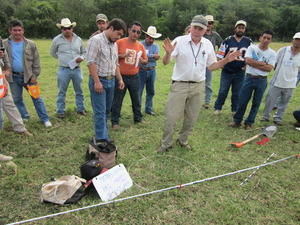 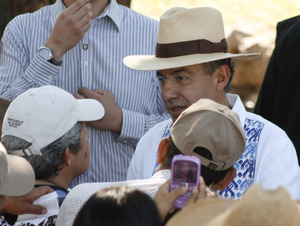 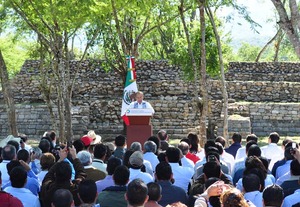 for the sierra gorda alliance 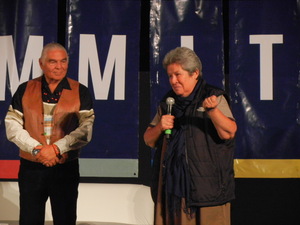 1.Nature´s Heroes, by Yann Arthus-Bertrand, a documentary produced for national television in France now with subtitles in Spanish or in English.

Posted in News from the Sierra Gorda